Over the past six decades, tourism has experienced continued expansion and diversification to become one of the largest and fastest-growing economic sectors in the world. Many new destinations have emerged in addition to the traditional favourites of Europe and North America.

Tourism has boasted virtually uninterrupted growth over time, despite occasional shocks, demonstrating the sector’s strength and resilience. International tourist arrivals have increased from 25 million globally in 1950 to 278 million in 1980, 674 million in 2000, and 1,235 million in 2016.

Tourism is a major category of international trade in services. In addition to receipts earned in destinations, international tourism also generated US$ 216 billion in exports through international passenger transport services rendered to non-residents in 2016, bringing the total value of tourism exports up to US$ 1.4 trillion, or US$ 4 billion a day on average.

International tourism represents 7% of the world’s exports in goods and services, after increasing one percentage point from 6% in 2015. Tourism has grown faster than world trade for the past five years.

As a worldwide export category, tourism ranks third after chemicals and fuels and ahead of automotive products and food. In many developing countries, tourism is the top export category. 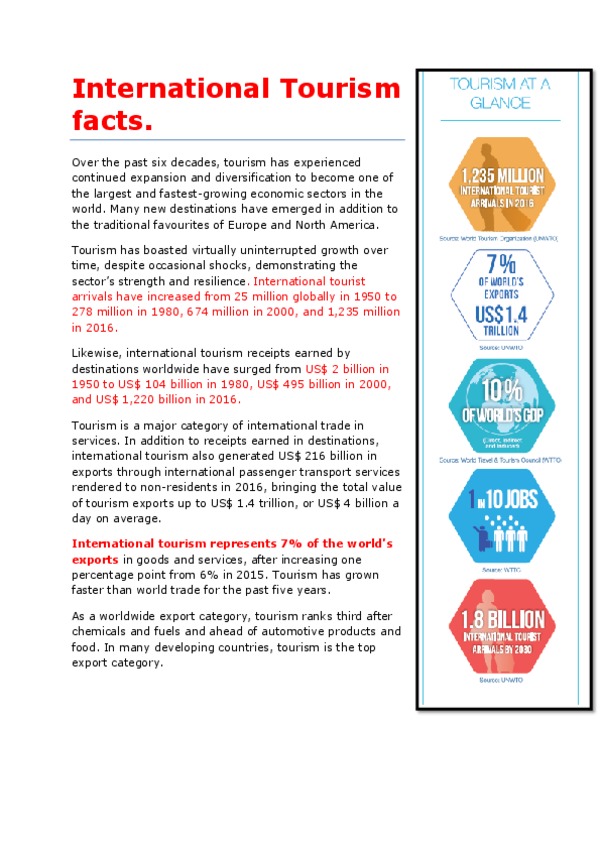