Destinations around the world welcomed 1.1 billion international tourists between January and October 2017, according to the latest UNWTO World Tourism Barometer. This represents a 7% increase on the same period of last year, or 70 million more international arrivals. Strong demand for international tourism across world regions reflects the global economic upswing.

The strong tourism demand of the earlier months of 2017, including the Northern Hemisphere summer peak season, was maintained through October. Destinations worldwide received a total of 1,127 million (+7%) international tourist arrivals (overnight visitors) in the first ten months of the year, 70 million more than in the same period of 2016. Results were driven by sustained growth in many destinations and a firm recovery in those that experienced declines last year.

Growth in international arrivals exceeded 7% in all destinations of Southern and Mediterranean Europe.

Africa (+8%) was the second fastest-growing region over this period, thanks to a strong recovery in North Africa (+13%) and the sound results of Sub-Saharan Africa (+5%)..

In Asia and the Pacific (+5%) results were led by South Asia (+10%), with South-East Asia (+8%) and Oceania (+7%) also enjoying a robust increase in arrivals. North East Asia (+3%) recorded more mixed results, with some destinations reporting double-digit increases, and others, declines.

Results in the Middle East (+5%) through October were mixed, with some destinations rebounding strongly and others continuing to report sustained growth, but the regional average was weighed down partly by a few that showed declines.

South America (+7%) continues to lead growth in the Americas, where arrivals overall increased by 3%.

Central America and the Caribbean both grew 4%, with the latter showing clear signs of recovery in October in the aftermath of hurricanes Irma and Maria.

In North America (+2%), robust results in Mexico and Canada contrast with a decrease in the United States, the region’s largest destination.

Results in the Middle East (+5%) through October were mixed, with some destinations rebounding strongly and others continuing to report sustained growth, but the regional average was weighed down partly by a few that showed declines.

Strong recovery of outbound tourism demand from Brazil and Russia

As for outbound markets, 2017 is marked by a strong pickup of expenditure on international tourism in Brazil (+33%) and the Russian Federation (+27%) after some years of declines.

Most of the other source markets continued to grow at a sustained pace. Among the top 10 source markets, China (+19%), the Republic of Korea (+11%), the United States and Canada (both +9%), and Italy (+7%) reported the fastest growth in international tourism expenditure. Expenditure from Germany, the United Kingdom, Australia, Hong Kong (China) and France grew between 2% and 5% *UNWTO 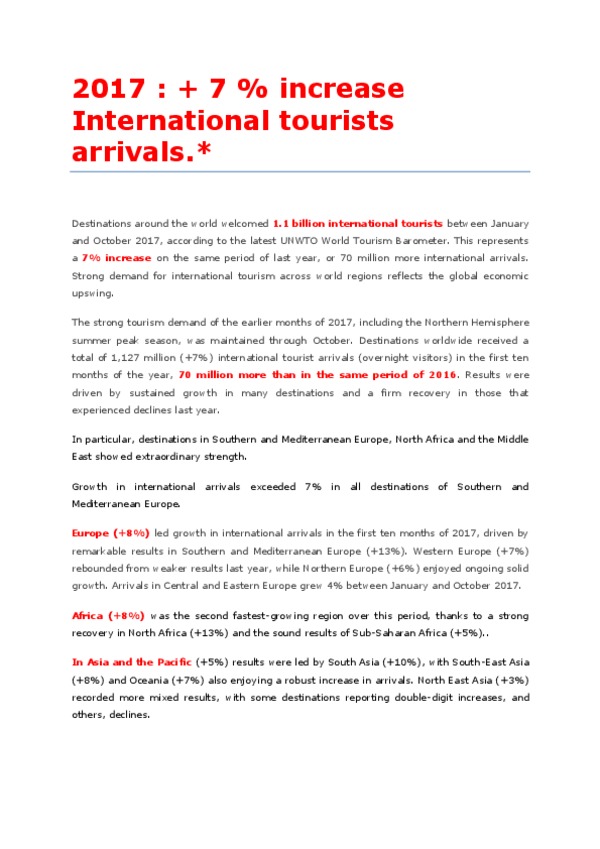